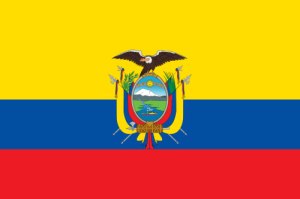 One of the challenges of this project that I underestimated was the sourcing of ingredients. Portland’s a pretty good food town for its size, but that’s mostly on the restaurant end of things.

Our lack of cultural diversity in the Rose City really makes it hard to source quality multi-ethnic ingredients – note the fact that I still haven’t gotten to The Bahamas yet, because I can’t find conch meat in Portland and I haven’t made it to Uwajimaya in Beaverton to see if they sell it.

Anyway, the challenge of ingredient sourcing is where I found myself Saturday, spending hours trying to get everything I needed for what I had planned on being a fairly pedestrian meal.

This is a lot of onion.

When I first started reading about encebollados, the national dish of Ecuador, I was pretty excited. I like onions. I like yuca. I like soup. Fish is OK. Put it all together and how could this go wrong?

I also wanted this to be the debut of inviting friends over to join in the international goodness. Accordingly, I decided to add some llapingachos – potato pancakes – to go along with my cebolla-filled dinner.

No meal would be complete without a tasty beverage, so I started my ingredient sourcing with a trip to Vancouver, Wash., to buy some aguardiente, a liquor popular in the Andean nations. I then returned to Portland to pick up some tuna at the New Seasons Market in the Arbor Lodge neighborhood.

I’d hoped New Seasons would have cassava/yuca, thus completing all of my produce shopping in one stop, but it was not to be. So I left New Seasons with quite a bit of produce, but not all that I needed.

One thing I didn’t buy at New Seasons was queso Oaxaca, the Mexican jack/mozzarella cousin called for in the llapingacho recipe. They had it, but at $7#, I balked, thinking it would be one of the easy-to-find Cacique-brand cheeses I usually see in mid-market grocery stores.

So I headed south to the nicer Fred Meyer store south of my house – not the poorly-stocked “Meth Meyer” on Foster Road – looking for the Oaxaca cheese – no dice. Not surprisingly, they didn’t have yuca either, nor the achiote seeds I remembered I needed.

Next stop was the Fubonn market on 82nd Avenue, in Portland’s Jade District. They had the yuca, but no achiote and certainly no Oaxaca cheese.

Desperate, I hit two Latino groceries on Foster Road – neither had the Oaxaca cheese – and finally circled back to Meth Meyer, which was laughable, considering Meth Meyer is often missing many exotic items, like garlic, and lemon, and basil. They do sometimes have raw meat in the ramen section.

No achiote at Methy’s. No Oaxaca either, so I went with mozzarella and called it good.

Now, it was time to cook. This recipe involves a lot of hurry up and wait – chop vegetables, sauté for a while. Chop more vegetables and boil them. Simmer. Boil. Repeat.

I sourced these recipes from Hungry Sofia, Laylita (1 2) and The Posh Latin Cook.

After boiling the tuna in the soup, set aside.

Fry the llapingachos in achiote oil.

Margot and Emily sit for our finished product – llapingachos in the center, encebollados in the bowl, aguardiente already consumed.

This meal was a lot heavier than I expected – and the onion is almost overpowering, maybe because of the heavy presence of raw red onion, which adds a great spice but also makes it a taxing meal.

The llapingachos fell apart when fully soaked in oil, and really should be treated more carefully than a deep-fry.

Funny thing about the aguardiente – last time we made a meal, with Denmark, we bought some aquavit, an anise/caraway-flavored liquor. Well, guess what aguardiente tasted like? Anise! It was sweeter than aquavit but remarkably similar.

Save the leftover tuna for tuna sandwiches, tuna salads, etc. Overall, an exciting way to start things off in the Western Hemisphere.