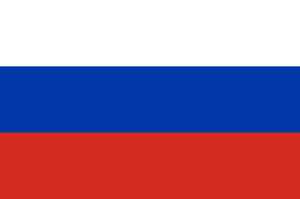 Having a blog and a baby simultaneously are hard.

We knew this, of course, but it still bears repeating. Having time to cook sophisticated meals in the midst of my grow-your-own-roommate project is challenging.

Now, before we talk about shchi, you may have noticed that the last blog was Latvia, and there are a lot of letters between L and R.

We’re in a strange place in the order of succession: 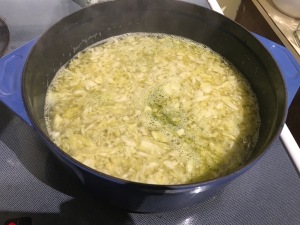 Sauerkraut and potato soup, ready to simmer for 20-30 minutes.

On a recent evening, Emily and Eleanor had a social engagement and I had plenty of caffeine, so I was ready to get the blog moving. But I didn’t feel like making a Malagasy stew. And rather than get stuck on the Micronesian nations, I decided to just move forward.

Which brings us to Russia.

When you think of Russian cuisine, you may think of borscht, but the stars are pelmeni dumplings and shchi soup. I skipped the dumplings – blame the baby again – and went straight for the soup, a sour soup filled with delicious sauerkraut.

Everyone loves some simmering onions and carrots, right?

And the key word there is delicious. Don’t just go to your neighborhood supermarket and buy the generic, shelf-stable jar of kraut. If it’s not for sale in a refrigerated case, you don’t want it. Portland is blessed to have plenty of fresh, local sauerkrauts to choose from, and it’s not the hardest food to DIY. If you’ve never had fresh sauerkraut, you owe it to yourself. It’s my favorite way of serving the brassicas. One taste and you’ll see why.

I’d also recommend, in contrast to the recipe below, adding some meat. It felt a little empty with just veggies.

This recipe very closely follows the one from Olga’s Flavor Factory, which also has a recipe with meatballs that I want to try some day.

A delicious pot full of soup.